You've got yourself a snazzy mountain bike. Now what? If you want to optimize its performance, equip it with gear from the right groupset. The Shimano Altus and Acera are among the top contenders for investment-worthy groupsets. Before we get down to the Shimano Altus vs. Acera debate, let's go over the basics.

A groupset consists of bike gears such as its fork, wheels, cassette, front and rear derailleurs, cranks, chains, and chainsets, among others. Each part has a critical role to play in deciding the bike's overall performance. Some Shimano groupsets are more expensive than others like the tiagra or 105 we compared in this article, but that does not necessarily mean that they are more efficient.

We will give you a breakdown of the pros and cons of the Shimano Altus and Acera groupsets. But before we get into that, here's a brief look at the brand: Shimano is a Japanese manufacturer that specializes in providing riders with premium-quality cycle parts. The company has different groupset gears for different types of bikes. The Shimano Altus and the Shimano Acera are for mountain bikes.

Before we go into the main points where they differ, here's a quick overview of the Altus and Acera Groupsets:

Overview of the Shimano Altus Groupset 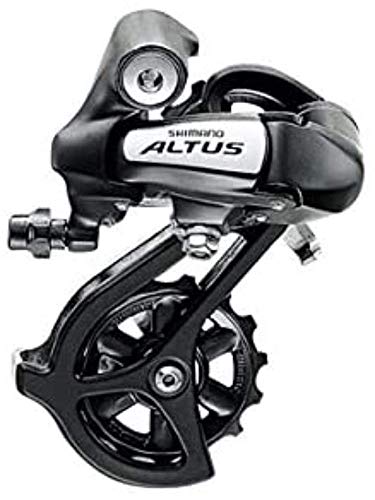 Click Image to See What others think about the Altus Groupset on Amazon.

You're likely to find Shimano Altus gear on entry-level mountain bikes or even on hybrid bikes. It is also not uncommon for a bike to combine components from multiple groupsets. In fact, bikes with Shimano Altus components often pair with Acera or Alivio components for optimum performance.

The Shimano Altus borrows technology from the Alivio groupset. Plus, the Altus line is light and operates more smoothly than the Acera line. The differences between the Shimano Acera and Altus are sometimes so minimal that they are occasionally missable. But an experienced rider is likely to notice the differences.

Overview of the Shimano Acera Groupset 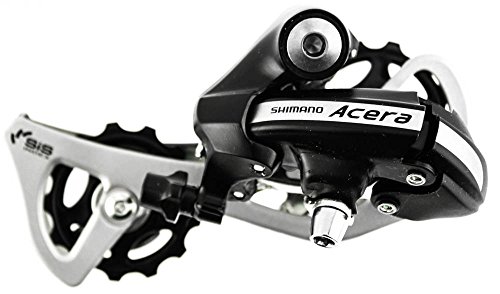 Click Image to See What others think about the Acera Groupset on Amazon.

The Acera falls mid-level in the Shimano hierarchy of groupsets. Its derailleurs and brakes are lightweight to facilitate a smooth performance for trail rides. Price-wise, the Acera falls under the affordable range and is popularly found on hybrid bikes and entry-level MTBs.

The Acera may not be the best performing of Shimano's groupsets, but it is versatile and user friendly. There have been improvements made to the Acera over the years. Each year, it is reintroduced as being more efficient than before.

The Shimano Altus' shifter isn't as friendly as the Acera. It only works with ALFINE S7000-8 hubs. The shifter in the Altus comes with a two-way release feature and an optical display for the gear.

The Acera shifter is suitable for a lot more bikes than the Altus as its pod design makes all the difference. The strategic build truly makes this groupset's shifter welcoming of any type of brakes. Moreover, The Acera shifter is also popular among riders because of its low friction. Adding to its list of pros is its clamp band, which is easy to access and set up.

Brakes in the Acera groupset showcase an incredible performance, but the Altus groupset steals the show in this category. The Altus brakes are flexible and perform superbly in most use cases. As such, we've never had to worry while using them as they've always provided immediate braking when needed.

The Acera has both disc and hydraulic brake systems for mountain bikes. These brakes are made of durable materials and provide just the right amount of force needed to brake. They may not be as powerful as the Altus' brakes, but Acera brakes boast a good stopping power too. 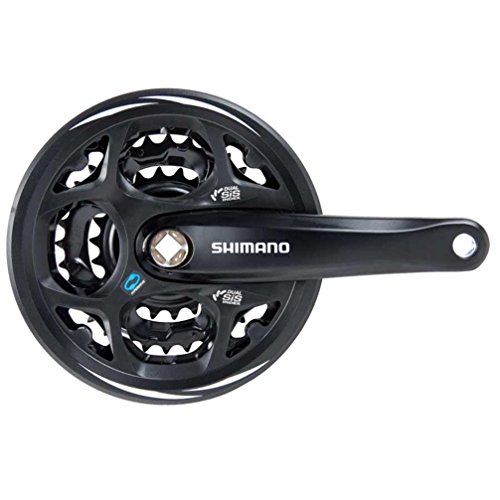 Click Image to See What Others Have to Say About Their Cranksets on Amazon.

The Acera's crankset is all about durability and sturdiness. The upgraded versions of Acera cranksets are lightweight, sturdy, and durable. One huge advantage of its cranksets is that you can combine them with shifters and chains of any type. The Acera M361 groupset utilizes three cranksets to ensure a fuss-free and quiet shifting. This, of course, with the cranksets' hyperdrive system.

The Altus' crankset focuses on ensuring that your bike is comfortable to ride. It comes in three numbered sizes and is compatible with chainrings of two different sizes. The black crankset makes it easy to replace your bike's chainring. The Altus crankset is perfect for efficient speed shifting.

The rear derailleurs in the Altus groupset are compatible with bikes with a 7 and 8 speed. These derailleurs are of premium quality and can be easily replaced. They boast a wider linkage to help with precise shifting and durability. The Altus rear derailleurs also come with a B tension spring, which aids with the wheel's easy installation.

In the Shimano Acera groupset, the derailleurs are available in 3x9, 3x7, and 3x8 speed combinations. They are lightweight and are focused on not weighing your bike down. Acera's version of rear derailleurs incorporates the famous Shimano Shadow design. This design facilitates a ride that is aggressively enjoyable and with little interruptions.

We Recommend the Altus Derailleurs found Here on Amazon.

Both Altus' and Acera's front derailleurs are designed for drivetrains that are of 3x9 speed. The Altus' version comes in top and downswing versions and is HYPERDRIVE compatible. The Acera version of this 3x9 speed front derailleur features the Hyperglide technology. It showcases an increased 29er tire clearance. This front derailleur also features adjustment bolts that are made of stainless steel. These bolts protect the derailleur from corrosion.

The Altus is priced comparatively cheaper than the Acera. However, don't lose heart if you prefer Acera because it may be more expensive than the Altus, but it is still affordable when compared to other groupsets.

This Altus shifting lever has wider compatibility and boasts a slim lever body. OPTISLICK technology ensures a smooth-shifting performance. This shifting lever also has a cockpit experience that is best described as streamlined. Here, the gear display shows the position of the gear in one convenient glance.

Acera's version of shifting lever offers responsive shifting for 9-speed mountain bikes. It is equipped with the Rapidfire Plus lever, which guarantees quick shifts. You'll find this feature highly beneficial when attempting a single stroke to downshift three gears.

Altus' bottom brackets such as the NEXUS have a refined appearance and are designed to rotate smoothly. They also have a square spindle and are compatible with 33T and 38T chainrings.

The DEORE from Acera proves to be a worthy contender with its superior rotation and sealing to deliver a high efficiency for riding.

What are the differences between the Shimano Altus & Acera Groupsets?

The Altus groupset shows up the Acera when it comes to variety. For instance, the former has cassette sprockets and disc brake rotors, which the Acera does not carry at the moment.

The Shimano Altus groupset has two cassette sprockets that are suitable for 9-speed mountain bikes. The gear steps between these cassettes' primary sprockets are placed closely together. This close placement ensures a smooth and comfortable pedaling for riders. It also offers disc brake rotors that deliver consistently powerful stopping power regardless of the conditions in which you are riding.

Other than those two components, the Acera goes neck to neck with the Altus in terms of quality and performance. Its shifting levers, front derailleurs, rear derailleurs, and cranksets are sturdy and efficient.

Both groupsets are popular among bikers in their own ways. Both are on the affordable, entry-level groupset in the Shimano hierarchy of groupsets. The distinctions between the two groups show up in aspects such as their design. The Acera is hailed as being able to handle the rigors of aggressive riding with minimal maintenance. If you're planning to take your bike out for adventures on a regular basis, you are likely to benefit from the Acera groupset.

Both Altus' and Acera's rear mechs incorporate the Shadow RD spring. However, the mech in the Shimano Acera has a hollow axle and is, therefore, lighter than Altus's mech. Both groupsets also offer the same crankset setups. Even when it comes to shifters, both Altus and Acera are on par with the Rapid fire Plus technology binding them. The shifter for both groupsets may not be the same, but they are identical.

The Shimano Altus offers a few more components than the Shimano Acera. But when it comes to quality, pricing, and value for money, both groupsets offer stiff competition to each other. It's safe to say that it all boils down to personal preference at the end of the day. Dedicate your mountain bike to one groupset or mix and match components from different groupsets (if it allows it), to get the most out of your bike.