If you are looking for an effective way to stay fit in your home's comforts, getting an indoor exercise bike might be one of the best options. Today, we'll compare two of the top indoor bikes Assault Airbike vs Airdyne to help you achieve your home workout goals.

Why did we choose these two products? Well, first of all, the Assault Airbike Classic and Schwinn Airdyne Pro both have excellent reputations in the home gym world. Assault Fitness has its primary focus on making the most convenient, helpful, and practical air bikes and air treadmills.

On the other hand, Schwinn is yet another innovative brand name that we can consider as one of the leaders for air resistance technology. These two brands have many popular products that put them a level above the rest in the home gym and fitness equipment market segment.

I found that both the Airbike Classic and Airdyne Pro have similar features, yet some prefer one over the other. So with this article, I want to help you find out which one will suit you more.

Now, let us get into the Assault Airbike Classic vs Schwinn Airdyne Pro comparison and settle this issue once and for all. Is one product better than the other? You'll have your answer by the end!

Off the bat, the Airdyne Pro is a more modern product that is better in some cases. However, both have their pros and cons that might suit your needs better. So, learning more about each product and each brand will help you make a more informed decision on which to buy. As such, let's start the comparison with a brief overview:

Assault has made sure that the whole frame of the Airbike classic is formed durable steel, thus, keeping durability and quality as two of the most important priorities. The Assualt bike comes with an adjustable seat that offers ultimate comfort. And it has a pretty good LCD that shows everything from the distance you covered to the calories, time, RPMs, and speed.

They've also added compatibility to dock mobile phones and tablets, so you won't have any issues keeping your device close while working out.

One of the best things about this air bike is that it has one of the provides excellent air resistance that is much better than most other air bikes. For those who aren't familiar with it, air resistance bikes use your pedaling force to add resistance to your workout. This mechanism is better for HIIT workouts than other resistance systems and allows you to burn more calories.

With the Assault Airbike Classic, you'll be getting the best in air resistance. Plus, the way the fans are positioned allows the wind produced by your pedaling to keep you cool. 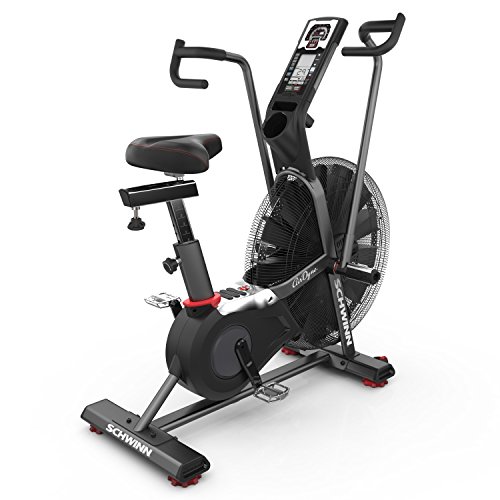 The Schwinn Airdyne Pro, on the other hand, has almost everything you could ever ask for on a regular exercise bike and an air bike, making it the best of both worlds. Regardless of how tough you want the resistance to be, this air bike is up for the challenge.

With the Airdyne Pro, comfort has been their number one priority. It has multi-directional handles that allow you to have a better grip, whether your preferred grip is vertical or horizontal. Moreover, the seat is extra padded for max comfort during intense workout sessions.

They've also focused quite a bit on the durability as this bike features double-coated steel construction and solid steel cranks. With these features, you'll never second guess buying this air bike.

Here, we can confidently say that it was Assault Fitness that introduced the air resistance technology back in the 90s. Thus, if we hear the word "air bike," we automatically think of Assault Airbikes. They have gotten the first-mover advantage in this case. They monopolized the market when it came to air bikes.

That was until Schwinn entered the scene with their version of the air bike. This product came in the form of a Schwinn Airdyne. And since Schwinn had already established themselves as a good Bike brand, people naturally gravitated to the Airdyne bikes. After so many years, they gave Assault Fitness a run for their money.

So although Assault Airbike Classic was the first to showcase this new technology to the world, we cannot ignore what an excellent product Schwinn Airdyne Pro has offered over the Assault models.

There is not a lot of differences between the Assault Airbike Classic vs Schwinn Airdyne Pro. After all, they are both air resistance fitness bikes. The significant difference is only in the size of their resistance fans, which we will discuss now.

First of all, the size of the fan catches our eyes. While the Schwinn Airdyne Pro has a 26-inch diameter fan that creates resistance, this is not the case for the Assault Airbike Classic. The fan for the latter measures only 25-inches in diameter, and the difference in size does make a noticeable difference in air resistance.

Another notable difference between them is that Schwinn Airdyne bikes look more modern than the Assault bikes. However, the new Assault Bike Elite has seen an improvement in design that puts it on par with the Airdyne Pro. On the Assault bike models, it has a much higher quality and durability due to its mostly steel frame. In contrast, the Airdyne models have a lot of plastic covering.

You might not move your air bike a lot once you find a proper place for it in your home gym. However, this does not mean that you will never move it again. What makes a product more portable is its weight and wheels if they are included.

The Airbike Classic takes the win in this area because it weighs less than the Airdyne Pro. The weights of the Assault Airbike and the Airdyne are 110 pounds and 113 pounds, respectively. This number might seem insignificant, but it does make a difference. Moreover, the Assault bike features a better design for its transportation wheels, making it easier to move.

The Airbike is the larger bike of the two with dimensions when fully assembled at L 49 x W 22 x H 51 inches. While the Schwinn Airdyne has these dimensions: L 42 x W 20 x H 52 inches. This means the Assault bike will require more space in your home. However, when we had them both assembled in our testing area, we couldn't tell the difference.

When it comes to comparing consoles between Assault Airbike Classic vs Schwinn Airdyne Pro, both have large LCD screens. The screens display the times, distance covered, watts, pulse, speed, and calories burned.

The difference lies in their programs and how the information is displayed. With the Schwinn LCD, you'll feel like you're looking at a space ship's control panel, but it is still well laid out. In contrast, the Airbike has a less cluttered display with easy to use controls.

Both bikes come with preprogrammed settings for various workouts. However, the Airdyne has more programs than the Airbike.

If you want simplicity and user-friendly features with your console, you should go for the Assault Airbike Classic. If you'd rather more programs and a more fancy looking display, then get the Airdyne.

The price of a product plays a vital role in purchase decisions. We always want to go for a relatively lower-priced product that offers all the benefits we need. So if money is a concern of yours, it will be better if you go for the Airbike Classic.

See the Price of the Assault Airbike Classic.

See the Price of the Schwinn Airdyne Pro.

What are the main differences between Assault Airbike Classic vs Schwinn Airdyne Pro?

We cannot say that one product is much better than the other when it comes to comparing Assault Airbike Classic vs Schwinn Airdyne Pro. We say this because they both have an equal number of pros and cons. 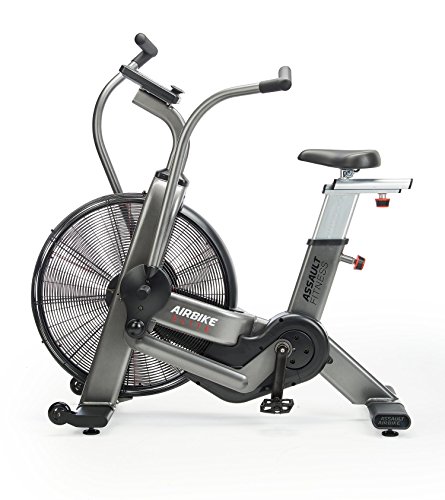 While it may be more pocket friendly to buy the Assault Airbike Classic, the warranty periods and features on the Schwinn Airdyne Pro justifies its higher price. And if you opted for the best assault bike model, it would end up being more expensive than the Airdyne.

The bottom line is that you will not regret purchasing either.

2 thoughts on “Assault Bike vs Airdyne – Which is the Best Airbike to buy?”